The bluebells of Middleton Woods have been calling me since the first pictures started appearing on Instagram! So today we combined this with a visit to Ilkley Riverside Gardens (mainly to include the play area). 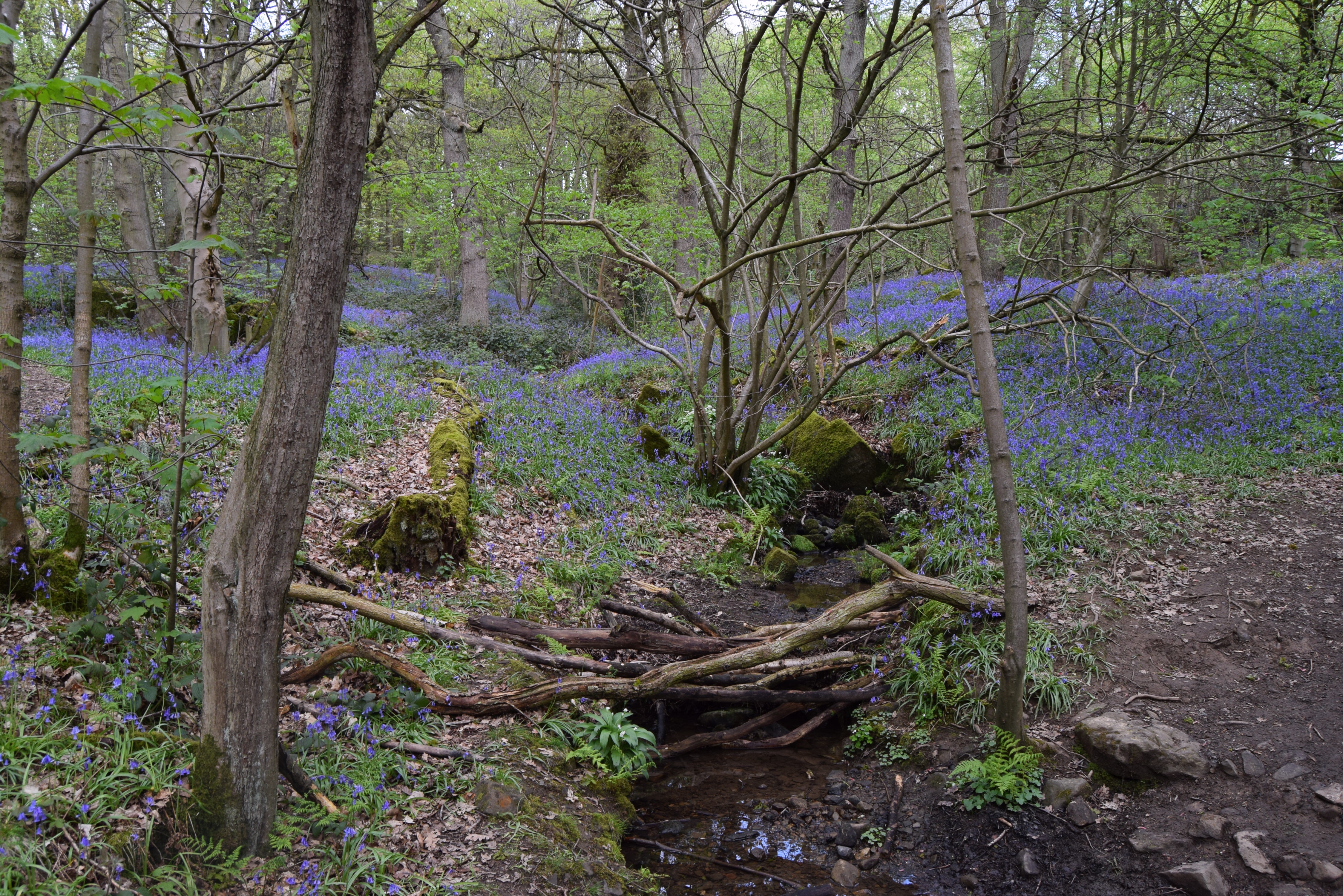 Distance: We shortened the suggested route (below), and map my walk recorded over 4km, but the full route is down as 4.8km so either we walked a bit less or their’s is a bit further.

Parking: If you haven’t been this way on a sunny day, be warned it gets really busy to park. The good news is it’s free- we parked outside Ilkley Riverside Hotel (and it was fairly quiet).

Facilities: We started at Riverside gardens which has a playarea and public toilets. Be warned the toilets in the hotel are customer only and they’re pretty strict about it. Riverside cabin does hot and cold takeaway food and drink.

Route: We followed the route 👉here, BUT we did it anticlockwise (so heading towards the lido first), and after exiting the Woods came straight back down to the river path along Harding’s lane. We also started and finished at the hotel (where I had a hot chocolate with marshmallows mmmmm).

Accessibility: Not suitable for buggies 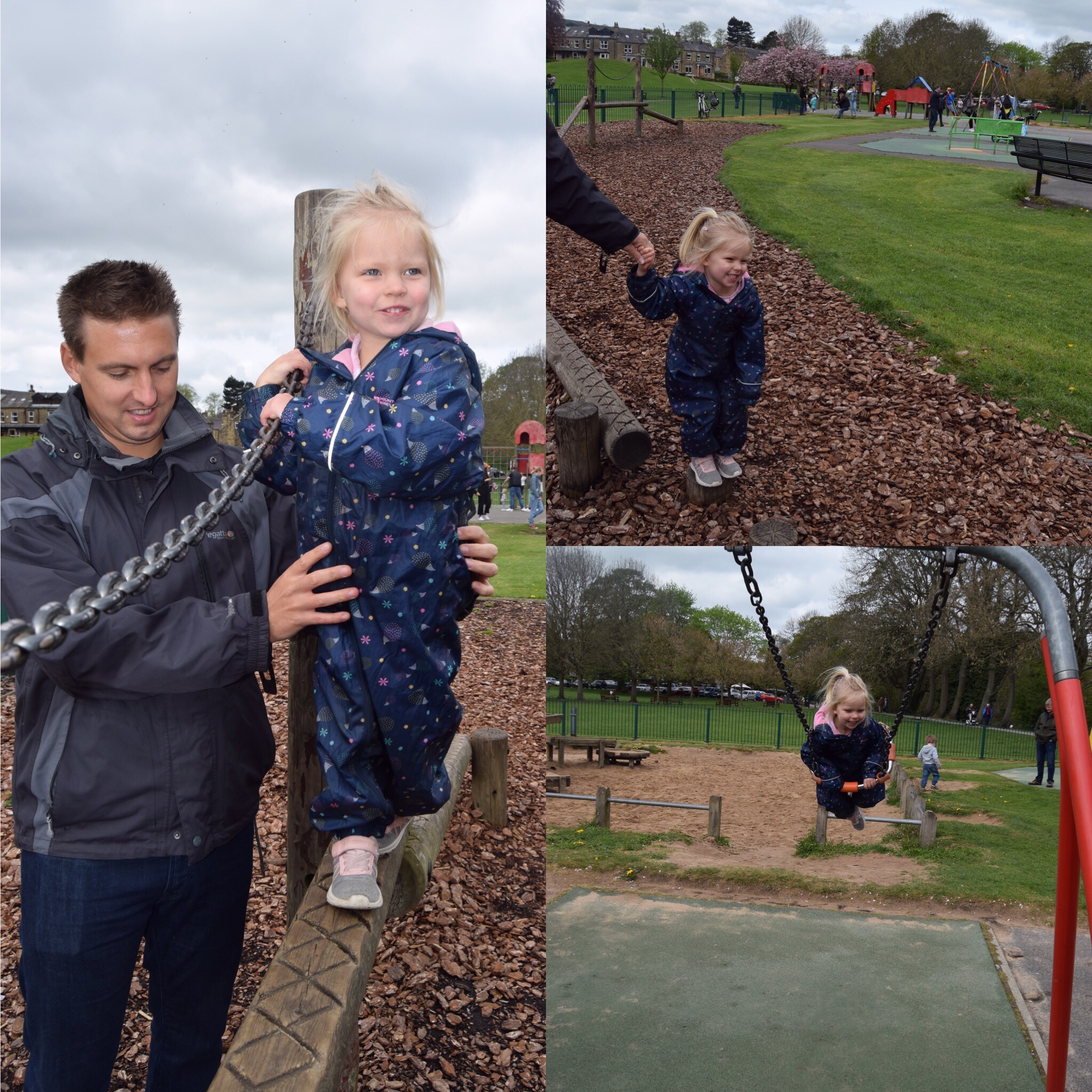 We started by a quick stop at the play area. Rightly or wrongly if one’s available I find it’s an excellent bribe to keep Jess motivated to get round the walk for when we return! It’s a decent one with a good selection of activities and equipment.

From here we walked through the gardens to climb the stone steps up to the bridge, after crossing we dropped down onto the path that passes the skatepark and skirts the rugby club. We briefly stopped to skim stones in the river, always fun!!

The path climbed past the lido and we crossed Curly Hill to enter the woods. If you’d followed the route provided, this would all be downhill… but we find Jess walks better uphill when there’s lots to keep her interested! 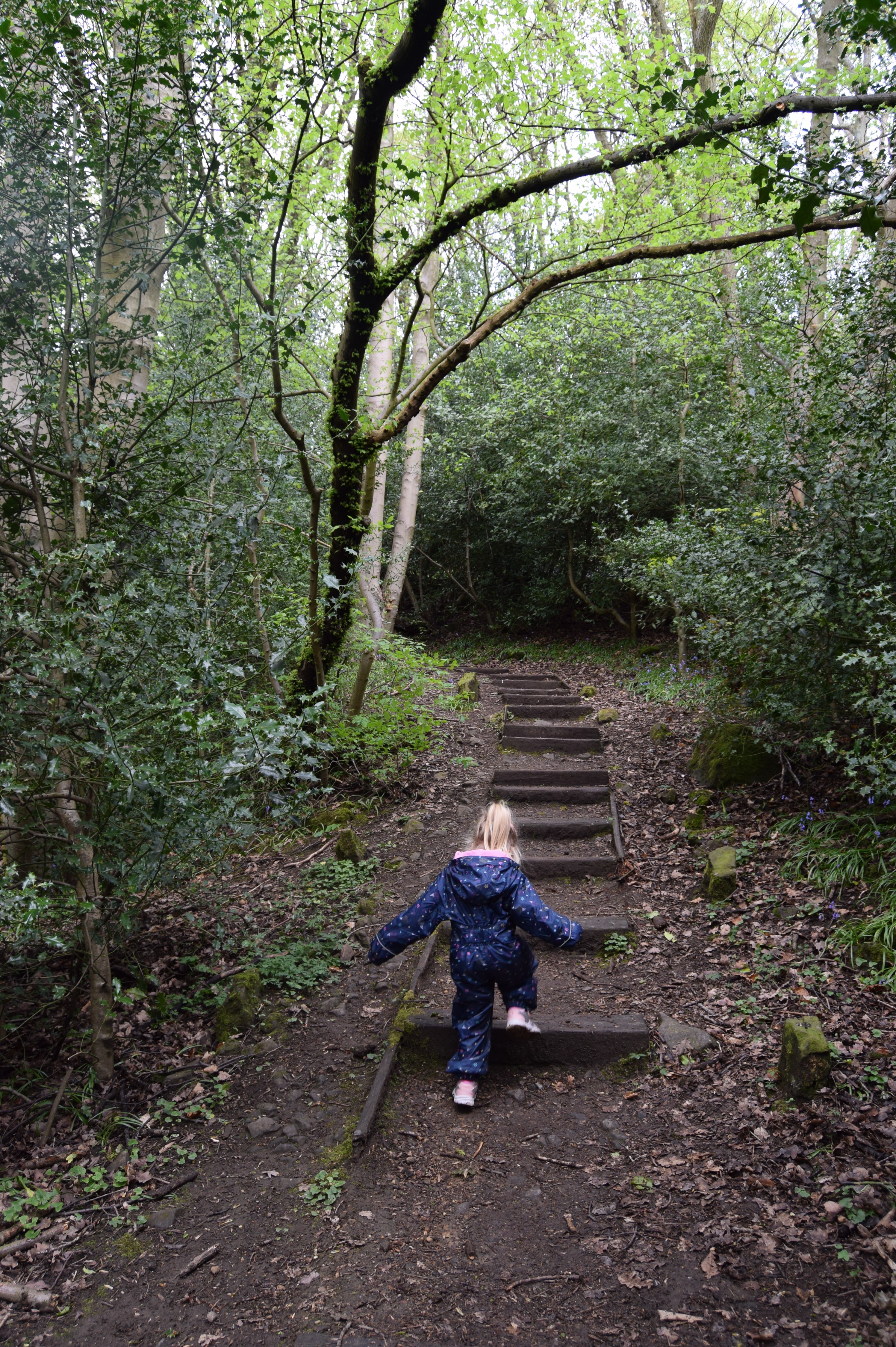 I’m not convinced we took the right track up through the woods, but we knew to head in a North East direction and eventually met up with the path I think we were meant to have taken. It’s probably easier in this since sense coming from the other way. The bluebells were just magnificent. Truly gorgeous… I think I took close to a million photos!! 😂😂 Jess kept herself entertained with her usual stick collections and playing hide and seek.

On leaving the woods we passed through a field with great views over Ilkley… and even more excitement; lambs in the field! 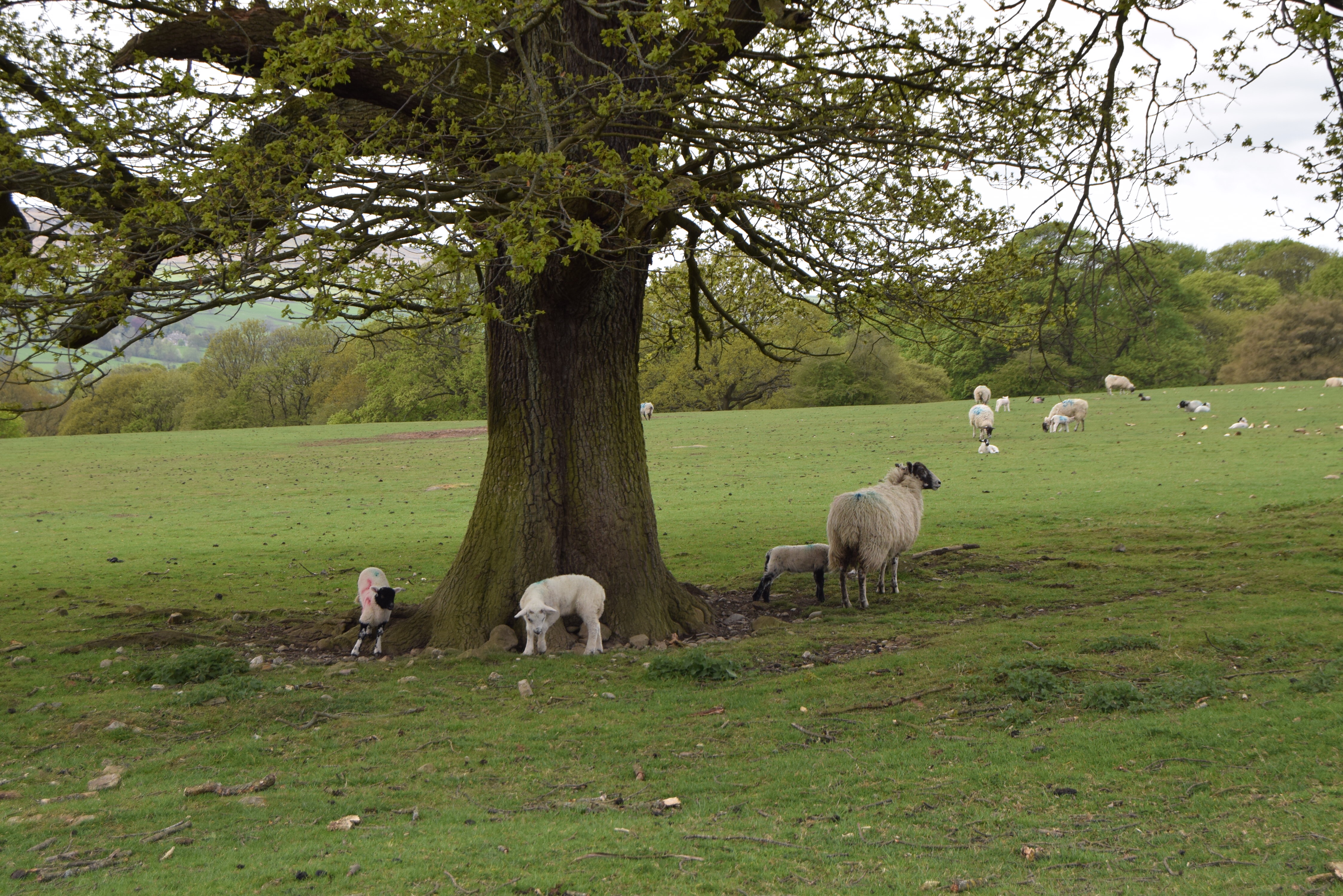 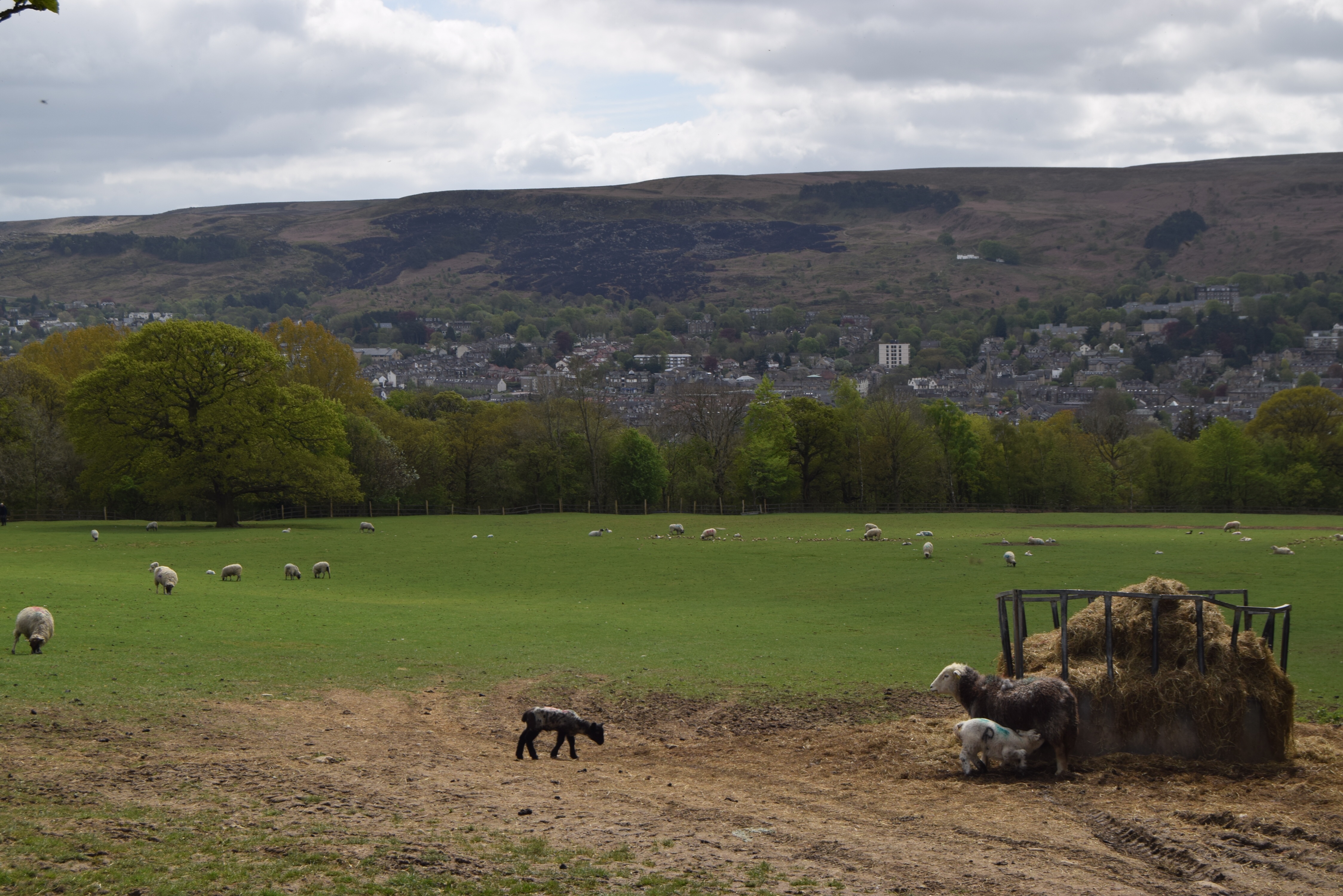 Rather than continuing along the route past the monastery we decided to head back along the road (Harding’s Lane) to rejoin the river. At just over 3 weeks until my due date I don’t want to push it too much with walking distance! If you decide to do the same be warned there’s no path for most of this road- but only three cars passed us and it’s a pretty road down with good views.

We picked the route up where the electricity sub-station is marked on the map, and followed the pretty path back along the river to where we started.

I think this was one of my favourite walks that we’ve done- maybe because of the bluebells which are such a treat to see! But as with all woods, every season brings something new to look out for, so I’m sure it would be special anytime!